Routing rules define the rules for the PBX to handle calls (inbound and outbound) based on various criteria. Routing rules route the outgoing calls to the gateway and sort out the incoming calls, routing them to users, groups or the IVR. You can assign only one number per routing rule and then route the number towards the destination (User, Group or IVR).

See below the parameters for creating new routing rule: 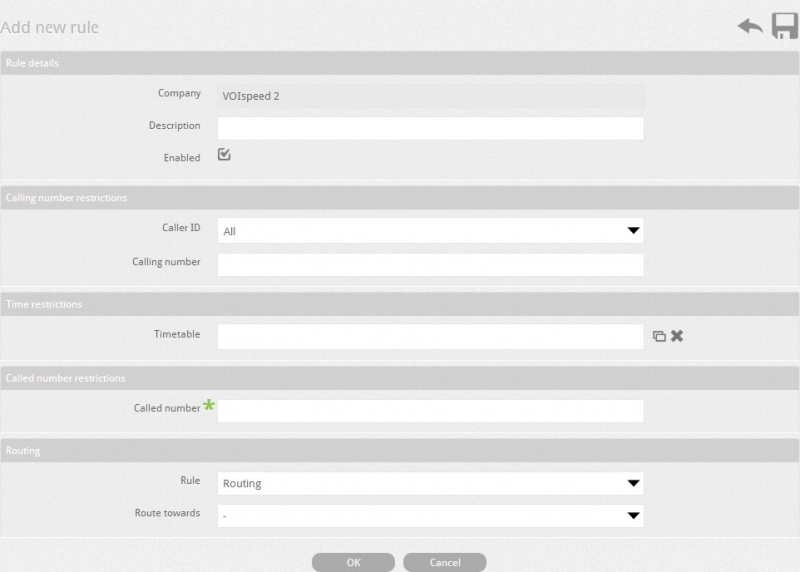 The rules for routing a call to a particular number (N) are chosen by the system based on a comparison criteria: any comparison provides a score. The scores obtained by the different comparisons are added together and the results obtained are used as priority values. The rule that has the highest score will be chosen. Within the same company the criteria used for the selection of a rule are as follows:

VOIspeed 6 carries out checks on whole categories of numbers (e.g. national, district, international, Mobile phones, etc.), which also allows you to define ranges of numbers and strings. A regular expression is a sequence of symbols (i.e. a string) which identifies the numbers and by using regular expressions you can build a simple syntax rules which are matched against the numbers to identify them.

At the moment VOIspeed 6 uses specifically only 2 symbols to identify the beginning and end of strings.

Note: The routing rules compares the criteria always from the first character of the number and you will notice that the system always automatically inserts the symbol ( ^ ) at the beginning of the string, although omitted by the administrator. This also implies that when you insert the symbol at the end of the string ( $).

Here are some other examples:

Below are the examples of incoming number mapping to handle the DDI numbers assuming that the root number of DDI’s is 01234567 (without zero if the calls are handled by the Mediatrix Gateway) and last two digits of the incoming number represents the extensions numbers .In the below example it is assumed that that root number 01234567% has been entered as called number.

Example 1: The extensions of the PBX are the two digit numbers (last two digits are extracted from the incoming numbers).

Go to Toolbox --> Routing and create a new routing rule described as follows:

Example 2. The PBX extensions are 3 digit numbers and only last two digits match with the DDI numbers (e.g. all extensions starting with 4 -> extension number  = 425).

Go to Toolbox --> Routing and create a new routing rule described as follows:

Example 3 : As in Example 1 you can map the incoming numbers to the extensions but if the incoming numbers are already configured in Example 1 and  (e.g. 0123456701-09) do not correspond to the internal extensions, and you want to forward the incoming call to the ringing group or an IVR then you must manually create a routing rule for the number. For example if you want 0123456701 to ring to hunt group then you need to create a routing rule for the number 01.